“I shall be telling this with a sigh
Somewhere ages and ages hence:
Two roads diverged in a wood and I—
I took the one less traveled by,
And that has made all the difference.”

—Robert Frost, The Road Not Taken

I am suspicious of consensus and despise group mentality. I don’t go with the flow, I swim upstream. The surest way not to convince me of something is to tell me that everybody else is doing it, or believes it or the like. I shy away from crowds and I dislike seeing footprints on the trail. I cringe when I pull up to a trailhead and the parking lot is full of cars. It’s not hatred of people, but preference for solitude.

That is the whole point for me in getting out into the forest, to escape the masses. To this end I prefer hiking during the week. If I go somewhere particularly popular on a weekend I usually do so on a cloudy, cold or rainy day when most people avoid the area.

And yet in early May, a weekend of all days, a blue-skied warm Sunday, I was headed into the Matilija Wilderness on a day that guaranteed a crowd and everything I prefer to avoid. I knew before getting there, by way of the exceptional weekend weather, that a mob of people had descended upon the creek. Arriving at the trailhead parking lot my presumption was confirmed. The lot was stacked with vehicles.

Coming to the fork in the trail I took the path less traveled. Less traveled because it lacks the exceptional waterfalls and swimming holes found along the other route. But that didn’t bother me. I wouldn’t enjoy hanging out at a waterfall with a noisy pack of people there anyway. If I was with friends, then yeah, I’d have fun and a crowd wouldn’t matter, but not on this day. I was out alone and after something different.

Of course, as for the two trails, “the passing there/Had worn them really about the same.” If it was less traveled my choice of paths didn’t show it. I merely figured that the vast majority of people that day had headed toward the waterfalls and swimming holes and that the other branch of the canyon, the one I was headed up, would be relatively vacant by comparison. I was not disappointed.

“Growing up [in Santa Barbara], I lived in a house that had a fairly big backyard and a creek across the street. It was when I was by myself that the environment meant most to me. … Being in nature can be a way to escape without fully leaving the world.”

—Lauren Haring, as quoted in Last Child in the Woods by Richard Louv 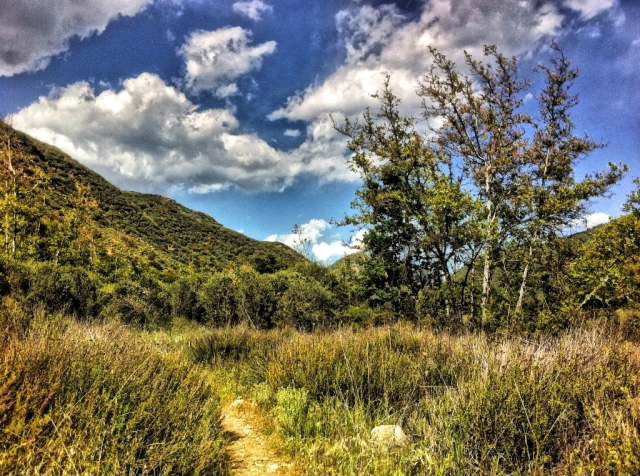 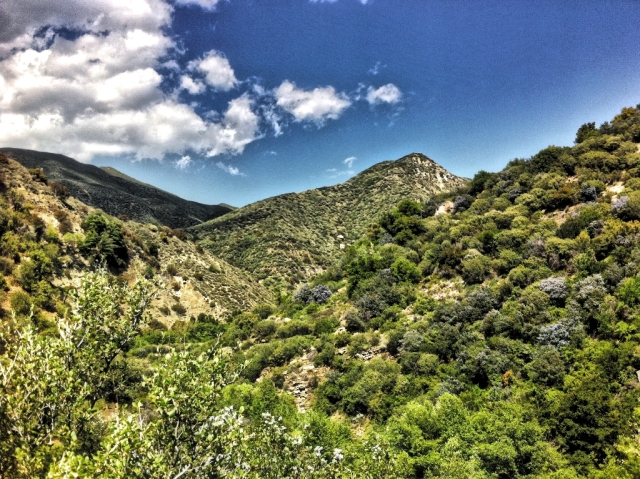 3 Responses to Solitude on a Busy Day, Matilija Wilderness