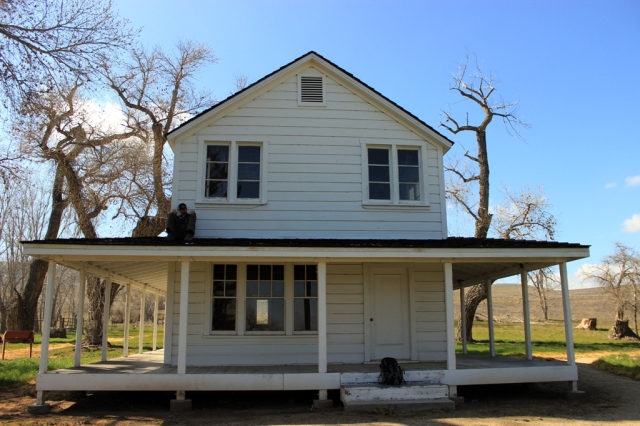 The El Saucito Ranch house, built of redwood by Chester Rude Brumley in 1878, was occupied until the late 1960s and is the oldest still standing farm house on the Carrizo Plain.

“Mr. Brumley has grown grapes, figs, pears, apples and other varieties of fruits and berries, his grapes are very large and very sweet and make large and luscious raisins. The other fruits were of the very best quality and some of the figs brought to San Luis were thought the best ever eaten by those whose fortune it was to get them. Apples and pears bore so heavily as to break down the trees.”

El Saucito ranch lies as a speck on the vast, bleak Carrizo Plain. Standing on a slope far above the old pioneer homestead, the world silent but for the gentle rush of wind over my ears and nary a sign of other people, the ranch sits like a far-flung outpost of civilization amid the emptiness of hundreds of thousands of square acres of sweeping grassland.

I can see the faint line of Soda Lake Road from afar, and the tiny clump of bushes and trees with a tinge of white that is the building housing the Carrizo Plain National Monument Visitors Center. But aside from those tell-tale signs of humanity, it appears as if very little change has come to the surrounding landscape over the last 140 years. It appears as lonely today as it was when the old house was first built.

Peering across the plain down upon the puny dots that are the ranch and its few outbuildings, in what is now the nation’s most populace state with an economy larger than that of most countries, utter desolation is its defining feature, even today. What must it have felt like in the 1870s when Brumley lived there with his wife, Margaret, and their children?

A trap door in the porch just outside the French doors provides access to a root cellar.

The Brumleys first lived in a house made from the dirt of the plain itself, a one room adobe, before building their elegant two-story wooden home. They were reportedly the only permanent residents for nearly 600 square miles. This at a time when miles were far longer than they are today, as the common conveyances were all pulled by horse over rough substandard roads. That’s a long way to travel for provisions and a hellish journey if in need of a doctor.

El Saucito Ranch was a self-contained oasis. Self-reliance was not optional, of course, it was a necessity of pioneer life, so far removed was the Brumley residence from the rest of the world. A powerhouse on the property generated electricity. Any machines that broke down were repaired onsite in the large detached garage presumably using whatever spare parts or material were on hand.

The sort of ingenuity required to run such a remote ranch is hinted at in a storage and sorting tree at the workshop, where spare nuts, bolts, small parts and other odds and ends were kept for future use or reuse. The homemade upright storage receptacle was crafted from old concave metal plow disks attached at intervals horizontally to a metal pole, the disks serving as makeshift holding bins.

The Brumleys raised sheep, cattle and horses and grew a wide variety of produce. There is a well on the property and a windmill that once drew cool water from the underlying aquifer. There is a small open reservoir that lies deep in the ground below the level of the surrounding plain and is surrounded and shaded by willow trees. This is the same willow thicket that purportedly originally attracted Brumely’s attention as a tell-tale sign of water, and which is the natural feature for which the ranch is named. Saucito means little willow in Spanish.

During the time the Brumley’s lived at El Saucito there were still Native Americans roaming the countryside. A display at the ranch relates one such experience recalled by one of the Brumley daughters:

“Life on the lonely plain was a big change from life of San Francisco. Nellie Brumley remembered a morning alone in the house with her mother when a band of 20 Indians arrived, chanting and asking for water. A nervous Margaret ordered Nellie to hide in the house, while she presented the Indians with water and a pail of freshly-baked cookies. The Indians ate all the cookies. . .down to the last crumb—and departed as abruptly as they had arrived.”

El Saucito ranch is seen here as a few trees and a speck of white about center frame. The white saltpan of Soda Lake is seen to the left and the Temblor Range, created by the San Andreas Fault, is in the distance beneath the clouds.