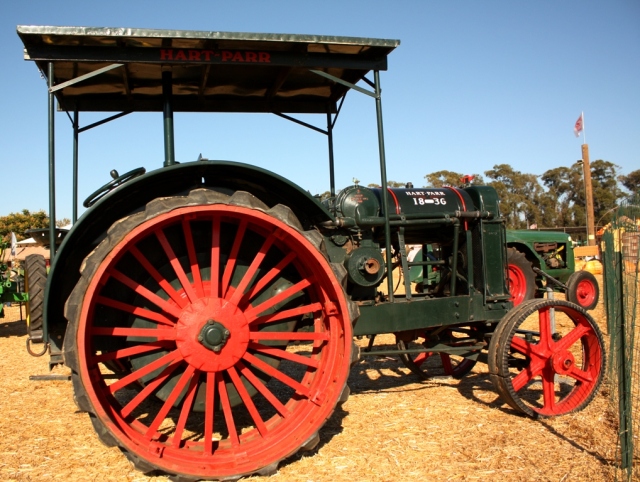 “It is no longer good business to have a lot of money invested in horse-flesh. . .when you can buy a Hart-Parr ‘Little Devil’ Tractor.”

In 1897, mechanical engineers Charles W. Hart and Charles H. Parr founded the Hart-Parr gasoline engine company in Madison, Wisconsin (later moved to Charles City, Iowa). Within several years the partners focused exclusively on making what they called “gasoline traction engines.” They built the first factory dedicated to their production in the United States and are known as the founders of the industry in America.

In 1907, Hart-Parr shortened the wordy descriptor for their machines from “gasoline traction engines” to the efficient one term, two syllable name recognized today: Tractor. “Actually, the term ‘tractor’ goes back to the time of Shakespeare,” Charles H. Wendel notes, “but this was apparently its first use in connection with gas-powered traction engines.” An advertisement from 1915 says of C.W. Hart, “he is the originator of gas tractors.” The company played no small role in American agriculture and the feeding of a nation and it helped end forever the era of horse and steam powered farm equipment.

“It was a rough land that bred a tough man.”

I recently happened across this vintage farm tractor built by Hart-Parr gasoline engine company. As an avid gardener and grower of common and exotic plants, and having an appreciation for history and a modest understanding of how agriculture facilitated the rise of human civilization, I have a profound respect for those that work the soil and bring forth from small seeds the bounty that sustains humanity. I do not take for granted stocked grocery store shelves that never go empty or the work involved in ensuring an ever present availability of food.

Such a mechanical relic from 1930 as a Hart-Parr 18-36 tractor might capture the attention of a scant few motorheads. To most people, however, I assume it would not even attract a passing glance let alone a lick of appreciation. To me, although standing in silence, it tells a tale worth listening to.

I stood peering at the old machine in wonderment, pondering the era it witnessed, the ground it tilled, the men that handled, maintained and repaired it and the people that it helped feed. “Farming looks mighty easy,” Dwight D. Eisenhower once opined, “when your plow is a pencil and you’re a thousand miles from the corn field.” Easier still, it appears, when the shelves at the market from which you pluck your victuals never go empty.

I tried to apprehend the dawn to dusk hard work involved in farming, and driving a vintage tractor over hot dusty fields for hours at a time with a burning engine sputtering exhaust in my face. Knowing that the sustenance needed to feed a family and nourish a nation required not just body busting labor day in and day out, but a good portion of luck with nature, too.

I thought of plowing the fields on a stiff, unforgiving assemblage of iron and steel with no suspension while perched atop a cushionless metal seat. No air conditioned cab with filtered ventilation, but rather sitting enveloped in hot plumes of airborne soil particulate, field debris and the fumes of burning gasoline. No sunglasses to break the searing rays of the blistering sun, a face dried from exposure and creased like a raisin from constant squinting.

I recalled the hassle of my own experience driving an old pickup truck with no power steering. How must it of been manhandling the wheel of this old beast? How much harder on the body must of it been with an offset steering wheel?

Leading thinkers in ancient Greece believed that the adversity of their environment was reflected in the character and physical traits of their fellow countrymen. The poor, rocky soil and lack of water, and the semiarid climate that was hot in summer and cold in winter, produced stout and muscular men of exceptional mettle and stamina. The human equivalent to the burly hardwood oak and olive trees also forged in the region’s trying environment, they were the yeoman that birthed consensual government and sunk the agrarian roots of Western civilization.

Ancient Greek farmers or geōrgos were not just hardy men able to force food from the barren land they cultivated with mere wood and metal hand tools and draft animals. They were fierce fighters, too. Their laborious working of the earth, and steely facing of the elements in a constant battle against nature to produce food, gave them the physical wherewithal and mental fortitude necessary to march as hoplites on the battlefield in phalanx formation, and clash headlong into their enemies in ferocious hand to hand combat.

It was Theban farmers led by a general named Epaminondas that in 371 BC marched to pick a fight with the notoriously fierce and deadly imperial Spartans. They decisively defeated the Spartans in the battle of Leuctra ending their dominance forever. The Thebans were a numerically inferior force of homestead farmers who owned small plots and worked the soil with their own hands, the Spartans a militaristic society dependent on slaves toiling in the fields to produce for them and sustain their martial state.

The inhospitable Mediterranean environment bred tough, tenacious people or as stated in the Hippocratic corpus, men “by nature keen and eager to work, headstrong, self-willed and prone to fierceness, rather than timidity.”

It is a view of humanity which I can appreciate and to a minuscule degree relate to, as one that has spent many long hours alone under a searing sun or winter’s chill hiking rugged backcountry trails, straining beneath the weight of a loaded pack, and having relatively scant little to sustain me against the savage indifference of nature. The strenuous exertion, and the denial of plush comfort, convenience and the immediate availability of the tastiest foods impresses upon me my good fortune. Such experiences, as easy as they are, really, breed a healthy respect for the plight of the vast bulk of humanity that throughout history have struggled against nature to merely survive.

I wonder how the toil of those that relied on the Hart-Parr tractor influenced and shaped other facets of life in a similar fashion as did the farm work of ancient Greeks who marched on the battlefield. Did the strength and stamina for such work in the 1930s translate into the courage and resolve that was required in the 1940s to fight on the foreign battlefields of World War II, and defeat some of the most intractable, resolute and vicious enemies humanity ever produced in the Nazis and Japanese militarists?

I have seen black and white images of men and women on the American plains dwelling in sod hovels. Today we smile for photos. Then they never did. I have read the accounts of doughty American farm boys of humble, hardscrabble origins that shipped off overseas during WWII, and with relatively little training, sought out and killed face to face the architects of genocide in some of the most trying and God-awful conditions known to humanity. Their work on the farm may not have been sufficient to achieve victory, but perhaps it was in many ways essential and a prerequisite.

“Are you going to take some photos of your family or just stand there all day spacing out snapping shots of that old scrap heap,” she asked. It was a serious question said in jest that brought me back to the present. I glanced at her without expression, looked back at the tractor, and then walked away from the green relic. How fortunate most of us are indeed. I do not take it for granted.

A video below showing the starting of a Hart-Parr 18-36 tractor. Listen to this sucker breath!

Gas Power: A Paper For Those Who Make, Sell or Use Gas or Gasoline Engines (May 1915)

Victor Davis Hanson, The Other Greeks: The Family Farm and the Agrarian Roots of Western Civilization (1995)

This entry was posted in History and tagged Farming, Greeks, Hart-Parr, Tractors. Bookmark the permalink.