“The traveler was active; he went strenuously in search of people, of adventure, or experience. The tourist is passive; he expects interesting things to happen to him. He goes ‘sightseeing.’”

—Daniel J. Boorstin, The Image: A Guide to Pseudo Events in America (1961)

Through the eye withering, searing summer heat of the Sonoran Desert we roll southward. The sun shines through the window burning my bare arm, the futile blow of air conditioning inches away unable to compete against its solar radiance from ninety-three million miles away, the glass hot to the touch. I slouch toward the center of the truck trying to avoid its unbearable glare.

It’s a wasteland out there—dirt, rocks, cacti, mesquite and little else. The barren, shimmering land stretches out limitlessly before us with no other signs of life but for the few vehicles we pass. And the odd man on a bicycle, or even afoot, pressing northward through the hellish inhuman conditions lugging a gallon jug of water. It’s mind-blowing to behold, unfathomable to an absurd degree.

The hottest ambient temperature I have experienced was in the Sonoran Desert at 120 degrees. It seems impossible that anybody could travel in these sweltering conditions by such rudimentary means. I wonder if I could even survive, should we break down, laying still in the dappled shade of the sparse dessert brush.

What must be compelling these disheveled men to risk traveling through this harshest of environments with so little? Their dark, wrinkly skin visibly glistens with sweat as we pass by, like strips of beef sizzling on a grill, carne asada on an asphalt griddle.

Adobe ruins left by somebody that gave up their relentless struggle against the Mexican desert.

The hours tick by with the constant spinning of our four balding tires. Deeper and deeper we plunge into the heart of the Mexican mainland. We drive for eighteen to twenty hours at a time, with short intermittent stops for gas and tacos and empanadas from random roadside food stands at all hours of day and night, where they chop taco meat on battered old greasy logs, flies buzzing.

Some how I manage to avoid becoming violently sick for several days, but later, in the high mountain town of Taxco, it hits with a crippling, bowel blasting vengeance. Desperately running to the bathroom, I don’t know whether to first squat or bend over, as it shoots with equal force from both ends.

We spend scant hours sleeping over in a few decent hotels, but also a couple of seedy rooms where I try to touch as little as possible and grimace when stepping bare foot into the showers. One room is too disgusting to bear, the unwashed sheets polka dotted in semen stains and who knows what else. If the walls could talk I would not want to hear their stories. After wrangling with the man that took our money and gave us the key we secure a cleaner room down the road. With only a few hours of sleep we waken dazed and heavy headed and roll out. 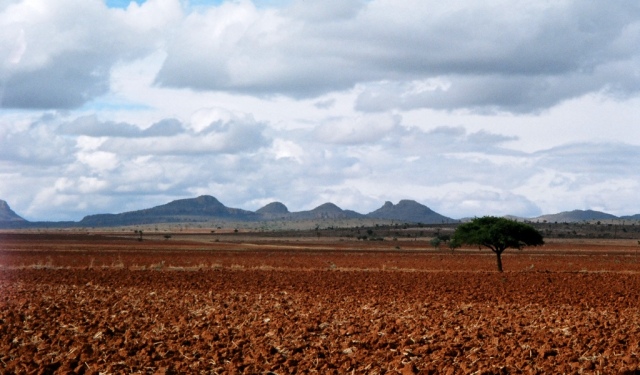 Approaching the outskirts of Tequila, I’m surprised that it’s so small. For whatever mistaken reason, I had anticipated the seat of production for this world famous liquor to be as large as the reputation of the drink it delivers to the farthest corners of the earth, to be humming with the bustling blur of a sprawling metropolis, but it’s just another small town in the Mexican countryside like so many others.

Pulling up to one of the first street vendors we come to, we eagerly slide stiff legged from our vehicle and mosey over to inspect the offerings. Various sizes of bottled tequila of differing hues sit atop a wooden table. After sipping samples and conversing with a woman, who stokes our interest by informing us that this tequila was smuggled out of the Patron factory, we negotiate a price and take with us a couple of bottles. And on we roll.

Much later, somewhere too far down the road to return, we crack the cap on a bottle and sample a swig. It’s fake. Tastes like something used to strip paint, certainly not what we had sampled. Maybe it’s a poorly made sugarcane moonshine or cheap mescal and maybe we’re lucky we didn’t go blind drinking it. What ever it is, we dump it. While I take it in stride with some degree of humor, it’s a blow to Clinton’s pride. I’m a rookie. He’s a veteran. He lives in Mexico.

Clint is an adventurer and has spent a fair part of his life traveling through South America and the Mexican interior always seeking out the less visited nooks and crannies. His trips are real, raw and original, not the hackneyed tour schedules of travel companies full of tourist traps listed on Wikipedia. He speaks fluent Spanish and is street wise in Latin American ways. But this time some petty swindler got the best of him and it’s clear, though he says little, that he’s stewing over it. 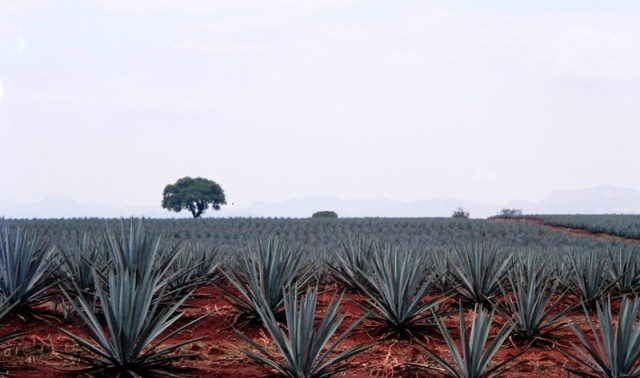 Blue agave plants, from which tequila is distilled, growing near Tequila, Mexico.

The building looks like the ruins of better times past. It appears to be under construction, likely never ending, because so long as a building in Mexico is not finished its owner owes no taxes on it. It sits beside a two-lane asphalt road in El Arenal, Jalisco, down the road from Tequila and on the way to Guadalajara. It’s fronted by a stone wall and open muddy soil on this gloomy, rainy afternoon. A gaping cargo entry door sits open and it’s dark within.

There are no signs of people or reason to think anybody frequents the place other than a few fading tire tracks in the mud. Most people would drive right by oblivious to its existence or maybe afford it a passing glance at most if it happened to catch their attention, but it’s the sort of place with an irresistible appeal to Clint and so he pulls in and parks.

We wander about, me doing so more to stretch my cramped legs than out of any real interest. It’s an unremarkable place. I’m along for the ride, Clint is leading the way. We peek inside, but it’s dim and unlit and nothing we see compels any further investigation.

As we turn away from the building a truck pulls in behind our rig and out steps a middle-aged man dressed in ranch attire common to Mexican men who work with their hands, denim jeans, a hand crafted leather belt and a light-colored long-sleeve shirt. His thick grizzly hair is neatly trimmed, his face smooth as well-worn saddle leather. He’s fit for his age, with broad shoulders and a narrow waist, and walks erect with an air of confidence and strength. He commands respect by sight alone.

My previously casual feeling evaporates before this man’s deliberate march. I’m a gringo thoroughly out of my element deep in a foreign country snooping around private property. A country where one must not only worry about being robbed by bandits and thugs, but shaken down by the police, too, which has happened to me more than a few times over the years.

Hildado is the man’s name and this is his distillery where he crafts limited production tequila, Cava de Oro. You won’t hear it hyped in flashy American commercials, won’t see its snazzy giant banner ads at major American sporting events and won’t see it on American shelves. It’s available in small quantities only in Mexico.

Hildado invites us inside and as we follow him in we see his assistant, a wiry bespectacled younger man that’s the polar opposite of his boss in appearance, sitting in the darkened room before the glow of his laptop screen.

The computer is an oddly out of place modern device in what looks like an old derelict building housing little else but wood barrels and a couple of small, utilitarian machines. While the making of fine tequila requires skill and specialty knowledge, the tools to do it are but few and simple.

Hildado gives us a tour of his distillery and explains the tequila making process. It’s a humble operation by the standards of other large companies like Patron or Jose Cuervo, but in his own small space with limited equipment he crafts liquor of exceptional quality. While tourists flock in droves to the factories of those other world famous brands, Hildado’s boutique distillery, the equivalent of a little heard of microbrewery compared to Budweiser, is just the sort of place for a traveler like Clint.

Hildado shows us the oven where the agave hearts are roasted, where they’re shredded, where they’re juiced and the tank where he lets the agave juice settle before transferring it to oak casks to age. One end of the building holds the preparatory equipment and the other side is stacked with barrels of aging liquor, all bearing the signed labels of Mexico’s official tequila regulatory inspectors ensuring that it’s genuine. Phony tequila is a big problem, as we learned first hand, and the Mexican government takes it seriously.

Hildado grabs a five gallon bottle half full of fresh water, a two liter bottle of Squirt soda and a bottle of his tequila and invites outside for drinks. For the next two hours we sit sipping his tequila with him and his assistant. Clint offers suggestions and advice on how to market Cava de Oro in the U.S., and though we just met Hildado by random chance, it’s as if he is an old friend who just gave us a personal tour and taught us how to make tequila.

And that, friend, is the benefit of exploring the path less traveled and peeking into the darkened corners of the world often overlooked, ignored or purposely avoided by others.

Be a traveler, not a tourist.