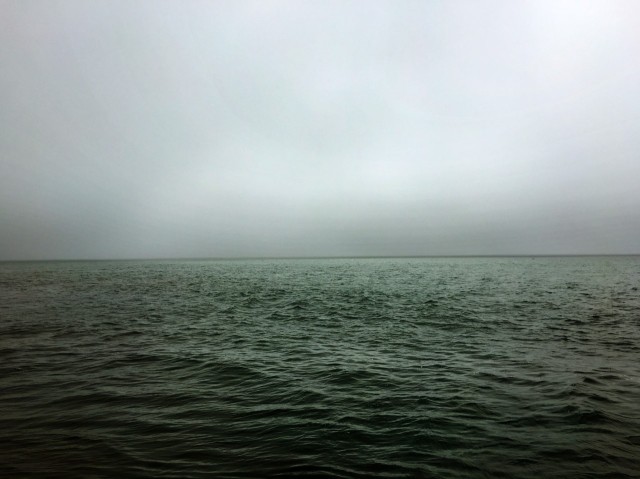 “The ocean is an unbelievably vast wilderness.”

The 76-mile long Gaviota Coast is the wildest wilderness in Santa Barbara County.

According to Gaviota Coast Conservancy, it is “the largest stretch of undeveloped coastline remaining in Southern California, and is representative of the only coastal Mediterranean ecosystem in North America.” It is here where the smothering urban sprawl of southern California finally and dramatically ceases.

Walled in on the north by the Santa Ynez Mountains and capped by the Los Padres National Forest, lined by miles of bucolic grassy hills and potreros parted by creeks, the Gaviota seashore is a raw and ragged frontier between civilization and the world’s single largest contiguous wilderness, the Pacific Ocean.

The sea along the Gaviota Coast is a biological wonderland of uncommon natural wealth. According to biologists at Santa Barbara Channelkeeper, “The waters of the Santa Barbara Channel form one of the most biologically productive ecosystems found on Earth.” The density and diversity of life in local waters, they say, is rivaled by few other places on the planet. That cannot be said of any other parcel of forest or wilderness in the county. 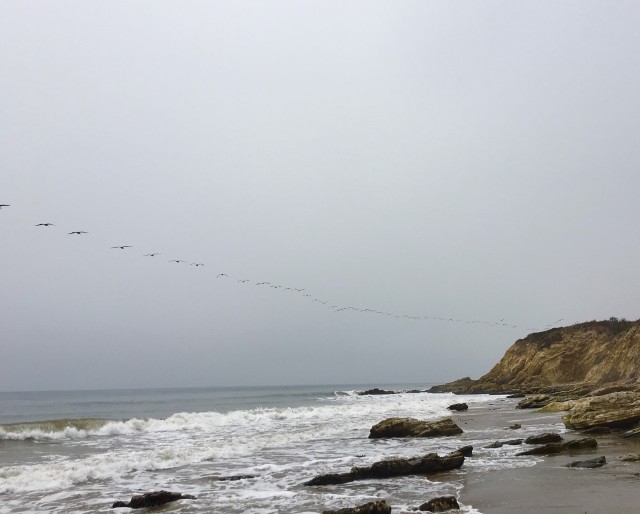 A squadron of fifty-one pelicans soar the Gaviota Coast in formation.

Animals put the wild in wilderness. Rodrick Nash explains in “Wilderness and the American Mind” that the root of the word appears to stem from “will,” as found in the Teutonic and Norse languages, with a meaning of being self-willed or uncontrollable. From “will” came “wild” which was understood to mean something that is unruly. Later the Old English “deor,” meaning animal, was attached with the resulting wildeor conveying the idea of uncontrollable or dangerous animals.

“From this point the derivation of wilderness is clear,” Nash writes. “Wildeor, contracted to ‘wilder,’ gave rise to ‘wildern’ and finally ‘wilderness.’ Etymologically, the term means ‘wild-deor-ness,’ the place of wild beasts.”

In “Coming Home to the Pleistocene,” Paul Shepard writes: “Wildness occurs in many places. It is composed of the denizens of wilderness—eagles, moose, and their botanical coinhabitants and all of the species whose sexual assortment and genealogy have not been controlled or set adrift by human design or captivity.”

Gaviota hosts all the denizens that Santa Barbarans commonly associate with backcountry wilderness. The largest of these on land include lions, bobcats, foxes, coyotes, bears, deer, and even the occasional condor. The coast here, land and sea, holds much more wildness than all other forest or wilderness areas in the county combined.

The marine environment and its remarkably rich biodiversity sets Gaviota apart from all else. If we are to conceive of wilderness as a land of wildness, then nowhere in Santa Barbara County will ever match Gaviota. 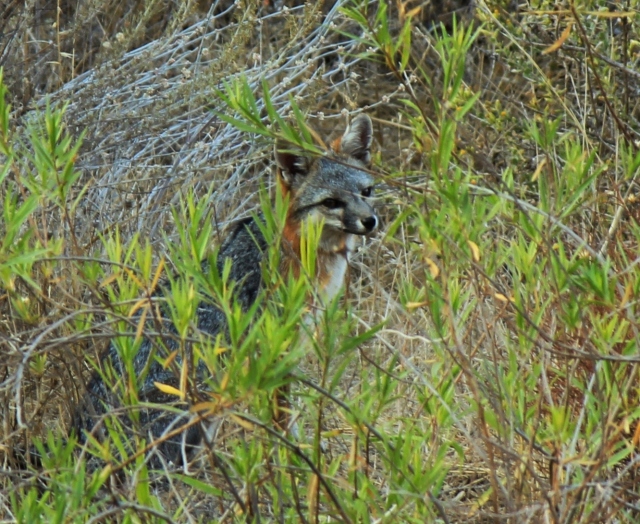 No official record exists of anybody dying from a lion attack in Santa Barbara County in contemporary times. Mountain lion attacks in the Los Padres National Forest are virtually unheard of. The only verified lion attack acknowledged by California Department of Fish and Wildlife happened in 1992. The attack on a nine-year-old boy occurred in Gaviota State Park.

On rare occasion a person may be mauled by a black bear, as happened in Carpinteria. Sometimes a hiker or camper is pestered by a bear that is particularly bold and inquisitive, but no recent record exists of a fatal bear attack happening in Santa Barbara County.

Gaviota hosts both lions and bears, oh my, but also a far more deadly apex predator. Nowhere else around here, no forest nor wilderness, am I lower on the food chain than when I enter the sea to swim, surf or spearfish along Gaviota. Here humans must contend with the man in the gray suit. 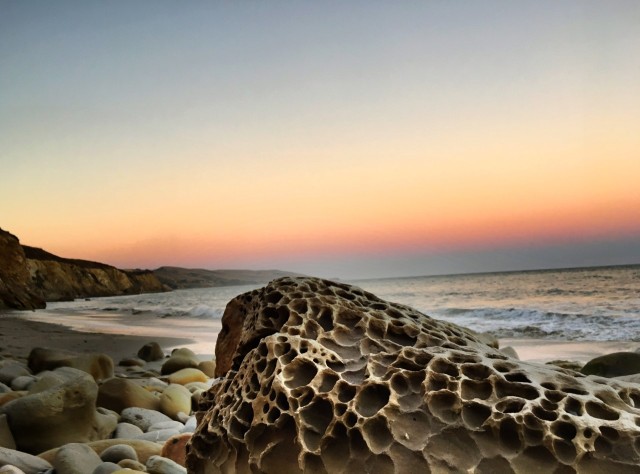 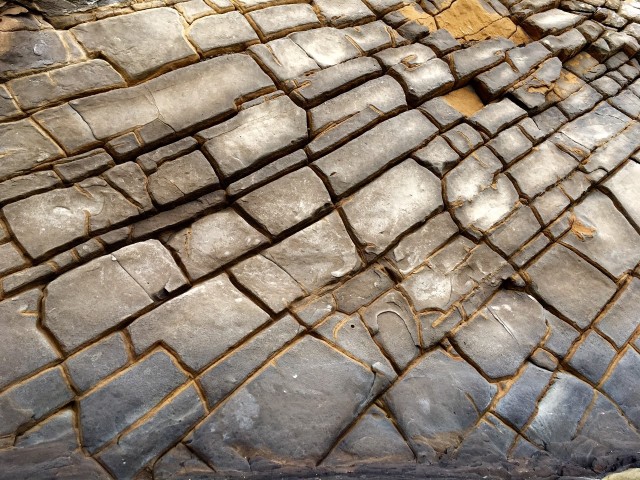 In the waters along Gaviota there is a real possibility of being killed by a great white shark. And, in some sense, I rather enjoy that fact, as perverse as it may sound.

Where else around this heavily populated and largely depleted land does a person get to experience such a primal feeling?

It’s a feeling very few people know. And though macabre as it may be, it is a rare and ancient feeling that is special. An emotive endangered species nowadays when humans so utterly dominate the natural world.

Think of peering into the green depths of the sea while floating alone in a kelp forest far offshore, and knowing there is a stealthy predator out there that could attack unseen at any second and end a life.

Think of floating on a surfboard with feet dangling into the dark water like bait, perhaps a toe nicked on a rock while wading into the surf and oozing drops of blood like chum that can be detected for miles. Think of surfing by moonlight at midnight, alone. (Previous post: Night Surfing) 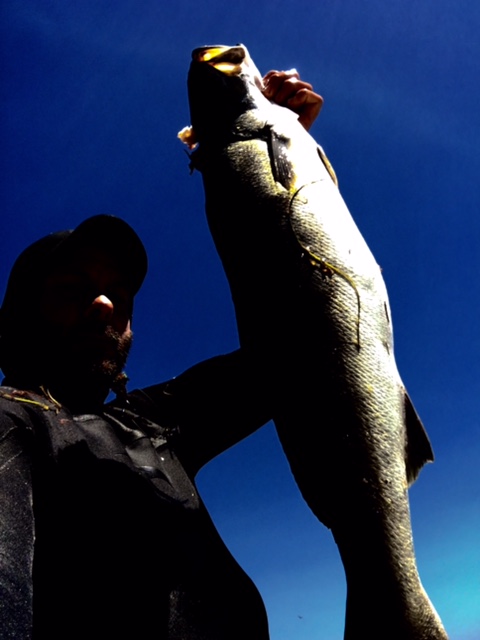 A white seabass shot spearfishing Gaviota in August 2016. Note the head shot. . .not bad, if I may say so myself.

In 2016 alone at least ten white shark sightings were reported in Santa Barbara County at popular beaches (though as with any eye witness accounts some may be dubious). One harrowing incident, however, was captured on video taken by the victim when a man spearfishing was nipped in the foot by a white shark along Gaviota in August 2016. (See video of attack here.)

The following list is a record of shark attacks in Santa Barbara County over the last 45 years:

Mentioned previously on this blog in 2010 was a white shark that washed up at Rincon Point.

I was once told by a friend of an incident he witnessed when freediving the Channel Islands. After hearing frantic yelling from one of his buddies, he looked up out of the water to see his terrified friend scaling the rocky wall of the island to escape a circling white shark.

That, my friends, is the wildest wilderness in Santa Barbara County! 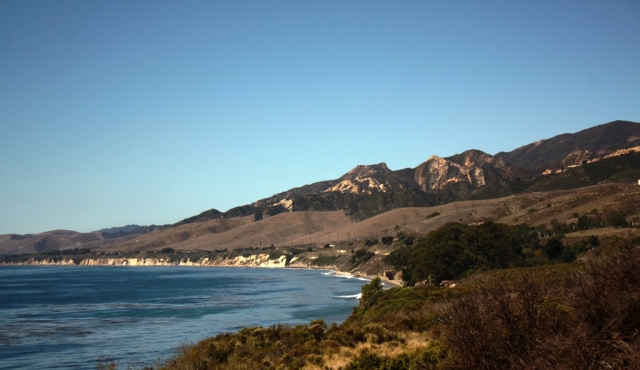 The Gaviota Coast remains largely unprotected in law despite its rare or at least uncommon natural wealth.

Please consider getting involved to help protect and conserve this precious coastal gem from further commercial and residential development.

The Gaviota Coast Conservancy is a great place to start.

Thank you for reading!