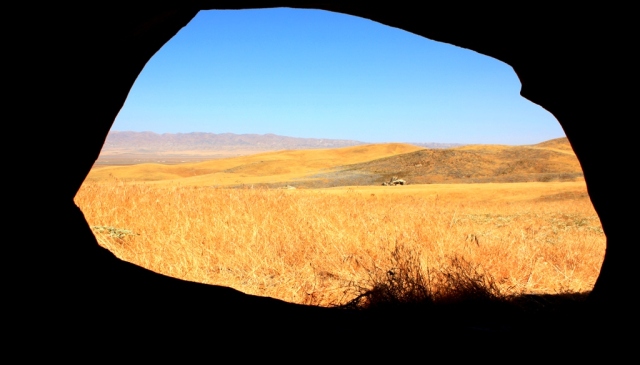 The Carrizo Plain National Monument preserves a slice of natural splendor and a refuge for reflection amid the solace and serenity of a land that exists today much as it did thousands of years ago. It offers a glimpse into California’s natural and human history and the promise of preservation for its future. Deceptive in its stark harshness, the plain is home to a wide variety of life and dotted with the traces of people who came before us.

I first experienced the Carrizo Plain on a sweltering July afternoon. After wandering about the landscape beneath a blistering sun for several hours exploring the unknown, I sat seeking refuge in the shade of a cave peering out over the desolate grassland. The land looked devoid of life.

Apart from the tell tale evidence left long ago by Native Americans, there seemed nothing of interest worth the long drive it took to get there. What could’ve possibly drawn hunter-gatherers to the area on foot? I thought. A barren landscape matched by an equally trying semiarid climate, the plain looked like a wasteland.

While driving home down the long dirt road leading out of the plain I saw a bull tule elk crowned with a magnificent rack of antlers. It struck a stately pose staring at me in the fading warm light of dusk. I was shocked. Holy ****! What the hell is that ******* thing doin’ here? I wondered.

It was the first time I had ever seen a wild elk in California. I had no idea that the Carrizo was part of their range and an elk was one of the last things I would have ever expected to see that day. It was a spectacular sight after a long day of running across nothing bigger than lizards and hawks. California was a little wilder than I had grown to expect.

I had not considered what else but a natural wealth of plants and animals might have attracted those earliest human inhabitants, whose historical traces I had sat pondering in the cave earlier that day. I now imagined dense herds of elk dotting the savannah long ago when seeds were still being ground in the bedrock mortars I had run my fingers along. A piece of the puzzle fell into place and history became a little clearer.

Through the years I’ve developed an appreciation for the countryside that I first dismissed as nothingness. It’s as if I had to detach from the frantic and rapid pace of city life, where so many details whiz by in a blur unnoticed, and attune myself to the slower rhythms and subtleties of the natural world in order to see what I was looking at. And that took time out on the plain.

I make the drive out there several times a year. There are a number of attractions that make it worth the journey, but sometimes the most rewarding experience is just being amidst an untrammeled land, where not many miles from one of the world’s busiest metropolises, it still feels like terra incognita.

4 Responses to Cave’s Eye View on the Carrizo Plain