From Home to Hills

I waken in the three o’clock hour after four hours of sleep and shuffle across the cold creaky floor, flick on the heater and proceed to the living room to dress. Despite my chronic mild dehydration, I pour yet another pint of stiff coffee, dump in a couple glugs of low-fat milk and place the diuretic concoction into the microwave. I grab my gear and haul it outside. Returning to the kitchen, I force down a pint of fresh water, grab my steaming coffee cup, hit the lights and slink out the front door into the cold dampness of the predawn hours. Being up and at ’em this early, and heading somewhere I’ve never been before, puts a thrillful tinge on what would otherwise be an ordinary average transit from home to hills along boring traveled-too-many-times roadway.

Sometime later I meld into the seat of Stillman’s (David Stillman’s blog) truck as we zip along the asphalt ribbon to the trailhead. We’re on our way toward the tilted, chaparral tufted sandstone slab known as White Ledge Peak eastward from Carpinteria and westward from Ojai. We don’t know if we’ll make it to the top of the peak, but that’s not something I’ve thought about. We arrive and park sometime in the latter half of the four o’clock hour, gather our gear and necessities, and begin marching by the moonlight of a waxing gibbous.

Early morning look up the creek at White Ledge.

We walk through moonlit darkness for an hour or so. Some places are illuminated enough to see where to walk, other places are swallowed by ridge line shadows and oak trees, but I walk quickly, ready for a stumble, feeling my way by foot as much as by sight, trusting that the way is clear and that I’m on it. Sometime just after five a.m. a shriek pierces the morning silence. It sounds like a large bird being eaten alive, but as I stop for a closer listen, and the thud of my footsteps and heavy breath fade, I hear the distinct but subtle voice of a cat within the eerie cry. It’s a mountain lion.

I’m barging through brush, the branches raking across my shins and arms, judging how hard to push through it based on the level of pain it causes. Slight scratching and I’m crashing through it all. A branch digs into my thigh and I slow trying to force my way through without pushing it further into my flesh, and then it pokes sharply at my leg bringing me to a sudden halt.

I’m climbing over branches, crawling through them, and under it all. Short sections of a footpath emerge before disappearing into walls of dead fallen limbs, but there is no signs of humans just bear scat. Hiking the incline through the creek takes much effort and energy. It’s frustrating at times as vines catch my ankles and seem to pull me backwards, as branches bend like rubber rather than snap in half to let me by, as I loose my footing on pitches of bedrock thinly covered in leaf mulch, as I slam my shins into logs and rocks, as thorny patches of wild rose leave me feeling like a pin cushion. I’ll be squeezing festering thorns and splinters out of my flesh for days afterward. The creek leaves me with numerous bloodied scratches and a few spots of blood on my thigh, which have soaked through my pants and are the size of a couple of dimes and a nickel. And then we finally begin to emerge from the riparian jungle.

Stillman hiking up the bouldery gulley that drains the face of White Ledge.

We break out of the brushy creek near the foot of White Ledge and begin the haul up the steep rocky gully, which runs along the seam where the slab of the peak meets the chaparral covered mountainside. It’s more strenuous hiking, but with added boulder hopping and scrambling. I step on patches of soil that cling to the angled slope and they disintegrate under foot crumbling away. My foot pushes through the thin layer of dirt and hits the steep slope of the underlying sandstone and begins sliding, which throws my balance off and I teeter, straining for traction and stability with every muscle clenched. It saps my energy struggling against the pull of gravity. Some sections I hike without much thought as on autopilot, while others require undivided attention to avoid slipping and tumbling like a rag doll down sheer rock faces. Lather, rinse and repeat all the way up the mountainside. It wouldn’t take much to get hurt or worse.

Most of the morning passes with the day’s objective of reaching the summit remaining a questionable uncertainty. And then as we close in on the far upper portion of the peak it becomes clear that our chosen route will indeed lead us to the top. Not far below I had begun anticipating reaching a dead end like a box canyon, where the gully would end encircled by loose cliffs that signal the end of our endeavor or at least this particular route. I finally break free from the rock slope and head into boulders and chaparral finding my way to the pinnacle.

The summit consists of a rocky edge that juts into the sky running roughly east to west. It offers exceptional circular views of the surrounding region. It is a real peak, a true summit that requires a legit ascent, as I imagine what the three words should properly mean. It’s not just some ordinary high point in the hills. Hiking to the summit feels like a true feat, not merely walking a wide-open well-traveled uphill trail. White Ledge Peak is a one and only original. Though an old sun-faded and weathered, small wooden cross is stuck into a rock pile, we find no summit register and so place one we brought with us and sign in.

We spend some time atop the mountain. The gauzy presence of clouds and haze and the poor lighting make taking decent photos nearly impossible and it obscures an otherwise supreme 360 degree view. Much of the low lying lands below us are pale in the shadows and undefined.

A view from about halfway down a series of five waterfalls. 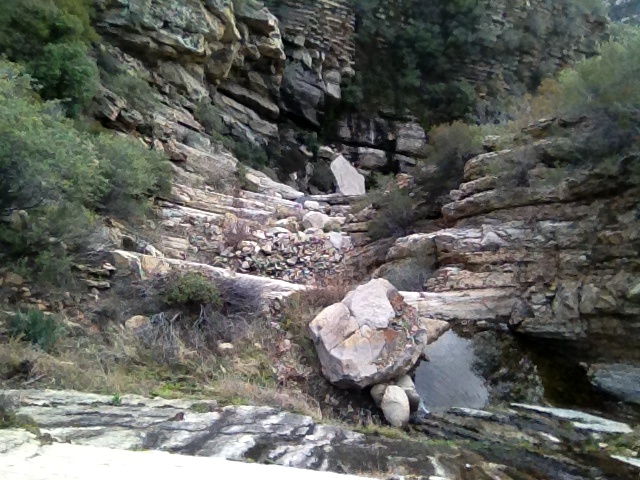 Higher up the waterfalls. 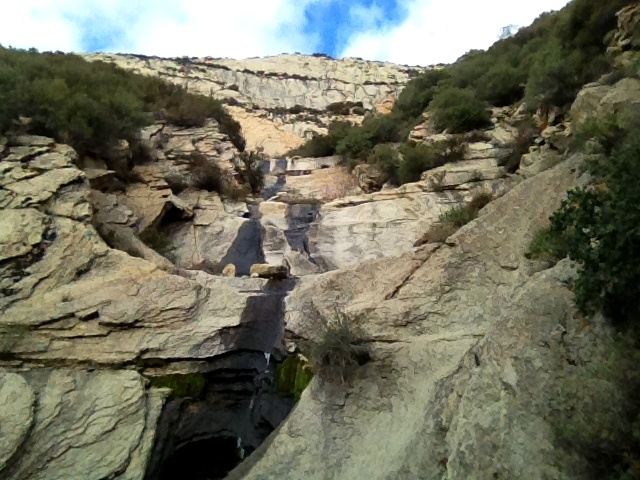 The waterfalls of White Ledge, which we climbed, scaled or scrambled our way up.

The west peak rears up like a jacking reef break.

Stillman in the distance standing on White Ledge summit.

Summit view looking toward Divide Peak and Peak 4864 or what somebody named King’s Crest.

Stillman ledged up while heading down. We had to back track a bit to get down to the slab of White Ledge.

Plodding down slope on our return we naturally cover distance quicker and it’s not long before we plunge back into the dense riparian cover of the creek. It seems to go on and on, and on. I mistake a set of bedrock ribs framing the creek, over which it flows in one of the many waterfalls, for the place near where we depart the canyon. My misreading of the land makes the already long, laborious march through the brush seem all the longer.

This second pass fighting our way through the creek is brutal. I’m dragging my feet, stumbling, sliding out and getting tripped up more frequently. Vines snare my feet as I wade through the thicket and sap disproportionate amounts of energy from my depleted reserve, as they force me to strain against them to hold my balance and free myself. Fatigued and with rubbery legs, I recognize the increased risk of injury and redouble my effort to trod more deliberately. But I just want to rail through the mess and get the hell out. I’m bloodied, bruised, scraped and punctured, thirsty and hungry. It’s a peculiar strain of fun.

We finally emerge from the canyon and sit for a final rest before completing the last segment of our return hike, the miles of which are counted on more than one hand. I draw on my drinking tube and hear the gurgles of an empty water bladder, but I’m too tired to bother tramping back down to the creek. I reckon that in the cool weather and fading light I’ll make the last long leg of our journey without suffering too much from a lack of water. I’ll keep my mouth closed as I hike, as usual, to lessen the amount of moisture lost while exhaling, and I’ll hold a pebble in my mouth to help keep it moist, and hope to avoid a dehydration headache. And I know I have a liter of sugary sports drink back in the truck. The sun is sliding toward the horizon and we end up hiking in the dark for the last hour or so. Fourteen hours later we triumphantly make it back to our ride.

Stillman below the twenty foot ledge mentioned in the previous photo.