Chumash Indian Mortars and the Puzzle of the Midden

We had set out to go spearfishing, but a south wind and a west swell combined to ruin conditions. We drove up the mountain from the beach and hiked down into the canyon, the creek within which drains into the Pacific adjacent the reef we had planned to dive.

Within about fifteen minutes of stomping through the brush we found two bedrock mortars beside the dry creek under the oak canopy. Surrounding the mortars, and spread across a large area, were the remnant pieces of shellfish long ago harvested by the people that had used the stones to presumably grind acorns. The site was located in an oak shaded draw near the top of the canyon at the confluence of several dry creek channels.

I never tire of finding these sorts of archaeological sites, and imagining what life was like for those that once frequented them, and how the land might of looked during their times, devoid of modern alteration and absent the mechanized drone of civilization.

The mortars are located on the rocks frame left, the seasonal creek flows just below them.

The midden was comprised mostly of mussel shells so far as I could determine. One aspect that I found interesting was that all the shells were remarkably small. I did not see a single large, full-grown mussel. I wondered why only small ones were scattered about the area. Did they prefer the taste or consistency of younger mussels?

Two weeks prior, I had harvested a pull of mussels and cooked them for dinner. Out of curiosity I had taken some small, medium and large mussels wondering if there was a difference in taste or tenderness among them. I have always tended to take medium-sized mussels thinking that the larger ones might be tough and that the smaller ones weren’t worth the work for so small a morsel. There might have been some degree of difference in tenderness depending on size, though I think the manner in which they are cooked is a bigger determinate in how tough they are. If overcooked they become rubbery and chewier. There was really no notable difference. They were all tasty and worthwhile.

Thinking back on my own experience, that there did not seem to be any notable difference in taste or consistency among differing sizes of mussels, it occurred to me that what I found at this Chumash site mirrored the findings of scholars working on the Santa Barbara Channel Islands. As previously noted on this blog, “midden evidence [found on San Miguel Island] shows an apparently significant decrease in the size of mussels harvested as the shellfish are thought to have faced increased pressure from a burgeoning Native American population.”

One of the mortars.

The mortar and midden site mentioned here was between one and two miles from the beach, high up in the canyon. I wondered why people had carried the mussels up the mountain rather than having eaten them down near the beach much closer to where they were harvested. I pondered this question assuming that efficiency was crucial to a primitive hunter-gatherer culture, and so why cart the additional weight and bulk up the mountain?

The site was not located on an expansive plot of land sufficiently large enough to provide adequate space for many people to live. It did not seem large enough to support habitation for anymore than a small group of people at best. With only two mortars, and relatively shallow ones at that, it also did not seem to be a site where a significant amount of work was carried out preparing food, though perhaps they might have relied more on free-sitting individual stone bowls rather than bedrock mortars.

My inexpert conclusion was that it didn’t seem likely that there were loads of mussels routinely carried to the site to support habitation. I’ve seen more and deeper mortars at a spring site in the Santa Ynez Mountains where, due to geography and a lack of flat ground and open space, habitation was impractical if not effectively impossible.

The oak grove at this mortar and midden site we found was minimal, as well. It was not a sprawling forest of acorn producing trees that seemed likely to attract many people looking to secure food. Though perhaps the forest of oaks was larger historically than it is now. Whatever the case historically, there were now just as large of oak groves found lower down in the canyon closer to the beach.

I thought that perhaps those people that visited the site had routinely brought with them mussels to eat while they ground acorns beneath the oaks. A sort of lunch cooked on the mountain for a hot meal while out gathering food. And if that was the case, it seemed to me that the logical action would be to bring larger mussels rather than smaller ones. It seemed it would require less work to harvest, cook and eat larger mussels and so was a more efficient means of filling the belly than dealing with loads of tiny shells.

And so, in other words, it seemed to me that the reason all the shells in the mountainside midden were so small was indeed because, like on the Channel Islands, they were a highly valued food source whose population was being heavily relied on by the Chumash. That mussels were routinely harvested before they had time to mature. The faded, chalky old shells were an interesting telltale clue telling a story about the Indians and their exploitation of natural resources, a clue on the mainland which matched the evidence found by archaeologists on an island across the channel.

Native Americans, in general, are often romanticized in American culture as careful and responsible stewards of the environment in a manner unlike much of modern humanity. As I squatted beneath the oak trees examining the shells once plucked from the seashore by Chumash hands, I wondered that if history had taken a different tack, and North America was left untouched by conquistadors and explorers and fur traders and subsequent European settlers and their descendents, and the population of Chumash Indians continued to grow and to increasingly rely on shellfish, would they have over-exploited blue mussels?

We proceeded down the canyon from the mortar and midden site, following the dry creek to the beach. There were several other small oak groves along the way, wonderful stands of trees that were to me no less attractive than the one where the mortars and midden were located. We did not, however, see any other traces along the way left by Native Americans.

It left me wondering why they had chosen the site they had, nearly at the top of the canyon, about as far from the beach as one could hike before exiting the canyon and reaching the chaparral covered ridge above. Perhaps it was a stopping place during travel between villages or harvesting and hunting grounds and villages, but being so close to the beach, it did not makes sense to me that they would stop to roast and eat mussels if hiking between destinations. Why not just eat them at the beach, fill the belly at the harvest site and then be on your way with no need to stop a mile and half later or carry the mussels?

Assuming the Indians were a practical people and did not act arbitrarily, I wondered why they had not chosen one of the oak groves lower down the canyon, closer to the beach and with easier access. Of course, all these questions might be quickly answered by scholars, but it was an unanswerable puzzle to me.

Whatever their reasoning, the forest within which the site was located, and the nearby seashore and nearshore reefs, must have offered a wealth of exceptional food. I always daydream of that long lost richness, how it was before the American population explosion greatly depleted what once was abundant. I wish at times I could experience the way it once was, though I harbor no illusions about how much harder life was at that time. 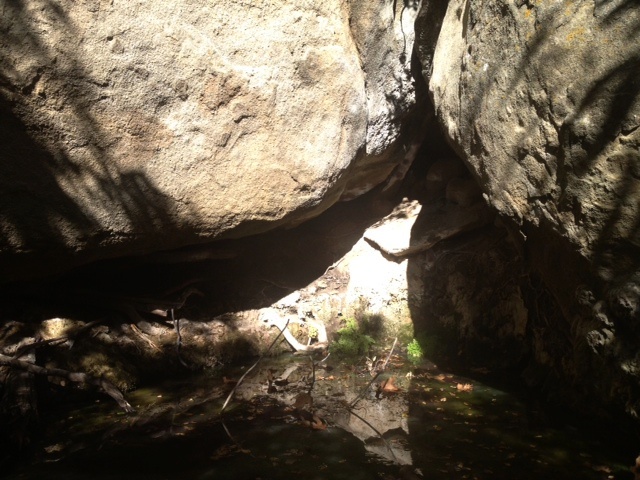 A short distance down the dry creek from the Chumash site we found this seep still holding water, which in this exceptionally dry year of record drought was a remarkable feature of the landscape.