“The music of falling water comes at intervals upon the ear. The uneven trail winding around huge rocks, upon the edge of precipitous banks or plying through the slippery stones at the bottom of the creek, gives just enough elements of beauty, danger, grandeur and loneliness to make a ride here thoroughly enjoyable. Near the head of the canyon is what is known as ‘Seven Falls.’ The water here falls into seven stone basins in succession. The rocky banks are broadcast with delicate maiden hair ferns and are green with moss. This is a favorite resort. At the head of the canyon is a large rock over which the water leaps with considerable force in the rainy season. This fall can be seen from the city.”

I had walked up behind the twenty-something year old guy and his lady friend right as I reached the most difficult section of the trail. For the previous ten minutes before his question I had stood around waiting as the agile young lady patiently coaxed and cajoled her friend up a steep slope of bedrock, and then across a near vertical sandstone wall above a pool of water about eight feet below. This was after he had already asked if they could stop hiking and just stay where they were.

She was leading him up the creek, and had hoisted herself up the first wall with little effort, and then with fluid ease systematically picked her way across the next section above the water. As her male companion slowly made his way along at a snail’s pace with far more difficulty, and serious reservations about continuing up the trail as he made abundantly clear, she praised every step he finally decided to take assuring him he was doing good. 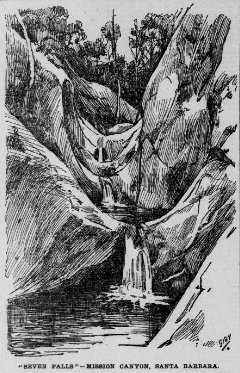 An illustration looking up the same section of creek as shown in the previous photo, as originally published in the San Francisco Morning Call on February 03, 1895.

One of her other friends on a different occasion, she repeated several times, hadn’t been able to make it and turned back. I suppose such encouragement was her only hope of dragging this guy at least a little farther up a trail he obviously had no interest in hiking.

All the while the guy was griping about one thing after another. It was all in the peevish tone of his comments and questions, rather than outright complaints. He was whining. The wall-like section over the water he took at a painfully slow pace. It’s a one-person-at-a-time section of trail with small handholds chiseled out of the rock because of its steepness. Which left me standing around waiting patiently for my turn. I wasn’t in a hurry so the delay didn’t matter, but it was plenty long enough for me to get my fill of the guy’s whining.

After making it up and across the two steep slopes of bedrock he had asked the question he really didn’t want to hear the answer to. “How much farther do we have to go?”

“Uh,” she answered, “like thirty minutes more.” I suspect she would have made it in ten to fifteen minutes were she alone. By the guy’s reaction to her answer one might have thought she said thirty miles.

“Thirty minutes!” he repeated with shock and deep disappointment. “Well I’ll just stay here for thirty minutes,” he said. Uh, that would be an hour, I thought. Thirty up means thirty down and nevermind any time spent actually enjoying what she had hiked to see. And so much for her company. Slouch.

“Are you regretting it,” she asked.

“Yeah,” he admitted without hesitation.

After he crossed the section, I swung my way across the short, but steep rock face in less than ten seconds and continued on my way hopping from bedrock to boulder on up the creek.

I don’t think badly about people that have less skill or experience in an activity than I have. Although I confess to sneering at hype and hyperbole when people exaggerate what they do. But I’ve been in plenty of situations where I was the person of lesser ability. And whatever I do there is always somebody that does it a lot better. I’m a man of mere average means.

But I have no tolerance for complainers.

Go ahead and say you are having a hard time doing something, having trouble or finding it difficult or even that you are not able to do it. Make the observation or let people know. Fine. No problem. I don’t expect people to remain utterly silent in the face of fear or discomfort until they keel over from exhaustion or plummet to their death on the rocks below. Even though I might act like that myself at times.

But don’t ever gripe about it! Mention it, sure, but don’t pester others with incessant complaints. Listening to the guy on the trail droning on and on I felt bad for the girl. Nothing like a whiner to ruin a good outing. 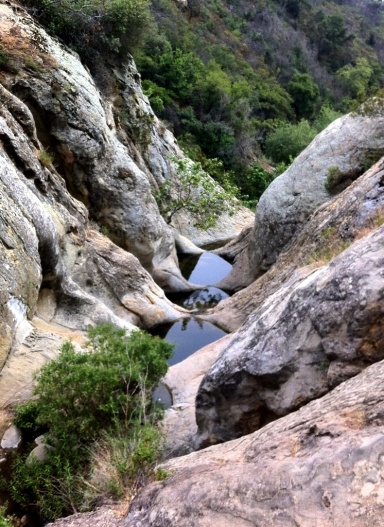 Looking downstream over the section of creek shown above.

A postcard of “Seven Falls, Mission Canyon” from the early twentieth century circa 1910. Mission Creek is shown here far more coniferous than I have ever known it to be in the nearly thirty years I have been hiking to Seven Falls. Although there are conifers on the mountain in the area, I never recall the creek being shrouded by so many of them even before the Jesusita Fire torched the canyon in 2009.

Upper Mission Canyon looking over the section where Seven Falls is located. 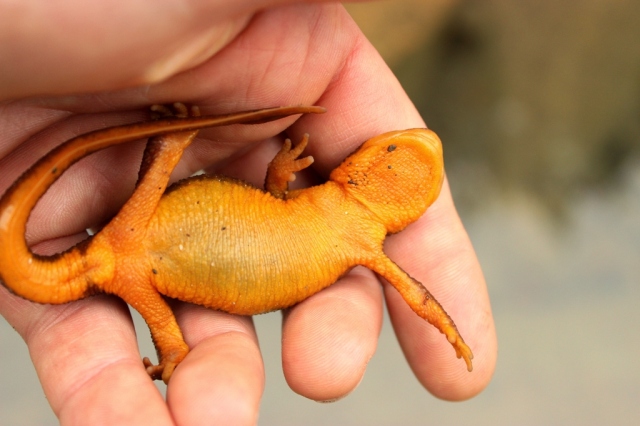 This bloom was on a clump of prickly pear paddle cactus that grows just above the top pool at Seven Falls. I believe it is a native cactus of genus Opuntia.

Mission Falls (Mission Falls is the waterfall mentioned but unnamed in the above opening quote from 1889: “At the head of the canyon is a large rock over which the water leaps with considerable force in the rainy season. This fall can be seen from the city.”)